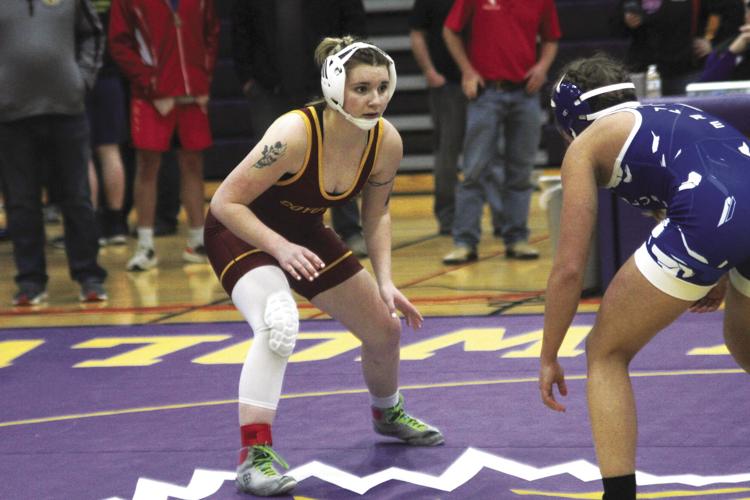 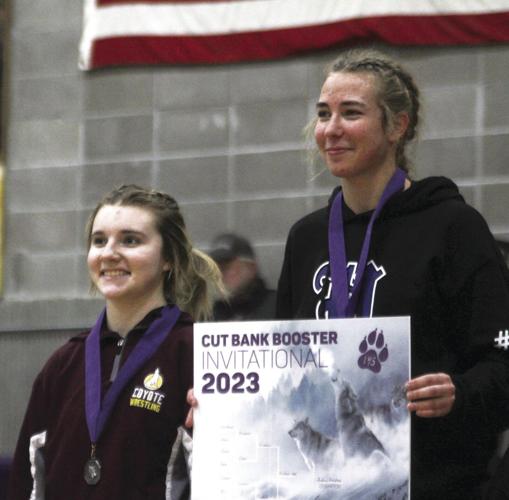 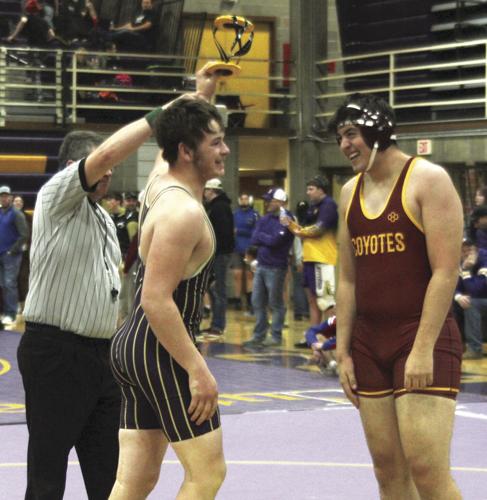 Ethan Sullivan of Cut Bank, center, and Ryan Simpson of Shelby share a laugh after Sullivan defeated Simpson in the semifinals Saturday. Photo by Scot Heisel 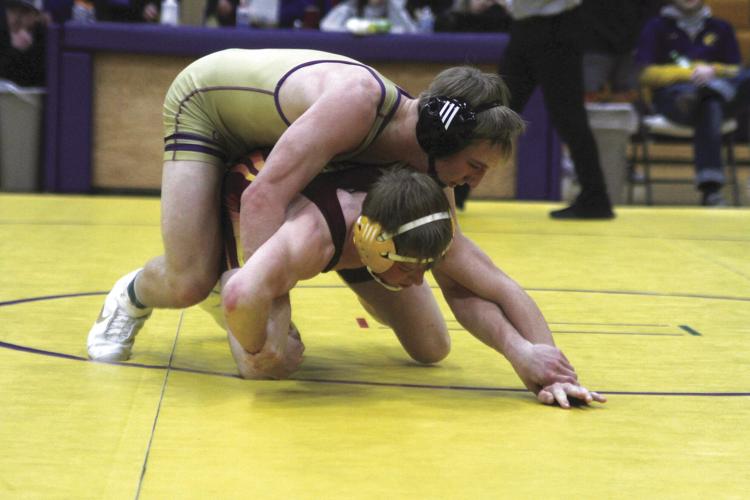 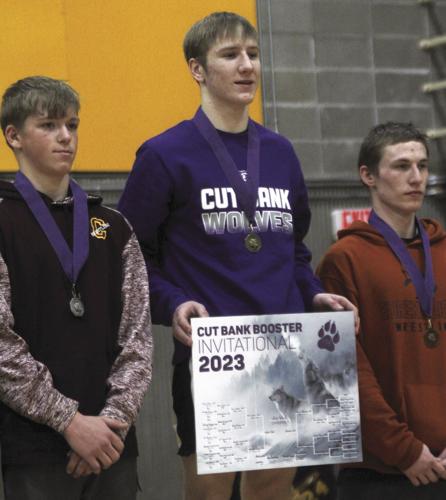 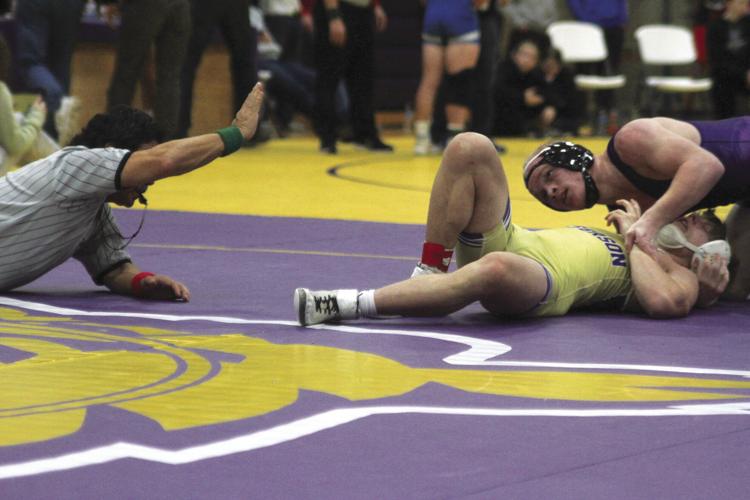 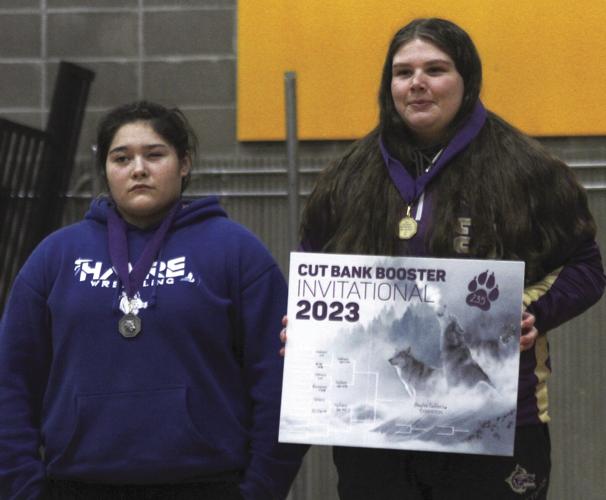 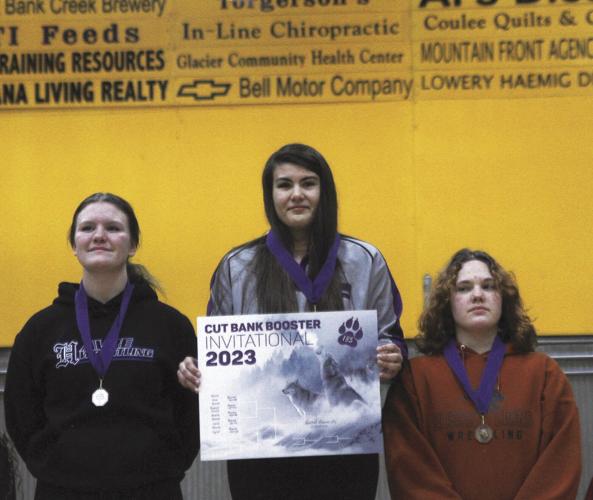 Ethan Sullivan of Cut Bank, center, and Ryan Simpson of Shelby share a laugh after Sullivan defeated Simpson in the semifinals Saturday. Photo by Scot Heisel

The Cut Bank Wolves wrestling team advanced four athletes to the semifinals of the 54th annual Cut Bank Booster Club Invitational on Friday and Saturday, and a pair of Cut Bank wrestlers finished the event as champions.

Junior Haylee Fetters went undefeated through three matches of round-robin competition in the girls’ 235-pound division to claim first place, and sophomore Alex Wahl ran the table to capture the boys title at 138.

“It was a great tournament,” head coach Cody Fetters said. “There was a lot of really good wrestling.”

Fetters said participation was much higher this year, compared to last year.

“It was significantly bigger, so the tournament was longer. It ran super smoothly. (Event coordinator) Randi Larson does such a good job. And all the support crew. We’re pretty lucky to have such a great crew of volunteers, parents and athletes.”

Along with the two titles, Cut Bank earned three second-place finishes, a third, a fourth, two fifths and a sixth.

Wahl won all four of his matches by fall.

“Going into the finals match, we needed all the points we could get,” Fetters said. “Alex is a goer. He works his butt off. He has a lot of tools in his toolbox, as far as wrestling technique. He makes it look easy but getting to the finals is not easy.”

Despite the weekend performance, Wahl said he still has work to do.

“I felt like some matches I could have done a little better in some spots, but I’ll work on it every week.”

Coach Fetters said winning the title was a nice rebound for junior Haylee Fetters, one of his two daughters on the team.

“Hayley was in the finals last year, so she has a lot of confidence. She didn’t have a great CMR tournament. The girl she had from Havre, they’ve been back and forth for three years. We knew it wasn’t going to be easy. She controlled the tempo of the match. She made a mistake, but she worked her way back for the pin.”

Finishing in second place were Richard Schmidt at 103, and seniors Bradin Murphy at 120 and Ethan Sullivan at 285.

Schmidt won his first three matches by fall, then lost a tough 3-2 decision to Quinn Rodewald of Big Sandy in the championship.

Murphy, who sustained a shoulder injury two weeks prior at Great Falls, was on the wrong end of a 4-2 decision in his title match against Jefferson County’s Dylan Mikesell.

“He’s still only about 85% on that shoulder,” Coach Fetters said. Once he gets it back, he will be a force.”

Sullivan advanced to the title match despite being one of the smaller heavyweights in the boys competition. He lost by fall in the final against Chandon Vulles of Superior.

Fetters said Sullivan considered competing at 205 early on this season but opted to go for the higher weight class. The coach also wrestled as a heavyweight during his own prep career.

“I was a heavyweight, so I know a lot of tricks and ways to get around the weight disadvantage. Ethan’s athleticism puts him at a different level to use his opponent’s weight against him.”

“He stepped up his game 200% from last year. He’s a leader in the room now, and his work ethic has increased so much.”

Sullivan was one of four seniors honored during a ceremony Saturday prior to the medal rounds, along with Murphy, Jacob Hjartarson, and Tristen Sydenstricker.

“I didn’t really want to think about that part,” Sullivan said. “I don’t want it to be the last, but it happens either way.”

Branch is the top-rated class B wrestler at 145 pounds. His lone defeat came against Reinhard Bold of Havre in the semifinals, a 16-5 decision. There was no letdown after the disappointment, however, as he won his final two matches by fall to claim third.

“He was a machine,” Fetters said. “After that loss, he just destroyed the next two kids. He’s ranked No. 1 in class B for a reason.”

Molenda, a freshman, was competing in his first varsity meet. Fetters said Molenda reached varsity eligibility prior to the CMR Classic, but the coaches decided the home event was a better spot to make a debut.

Coaches from each team cast ballots for Outstanding Wrestler awards at the end of the event. Decker Milender of Superior won the boys award for the lower weight classes after winning all four of his matches at 126. Tyler Schoen of Chinook, who also went undefeated at 182, won the award for the boys upper weight classes. The girls awards went to Angelina Escarcega of Poplar. She won five matches at 100 pounds, all by fall. The other girls award went to Jacee Richardson of Circle, who won four matches to claim the 152 title.

Next up, the boys head to Choteau on Friday for a B/C meet, while the girls will participate in an all-girls event at Hellgate High School in Missoula.

Lady Coyote Berlin Larson advanced to the championship match in the girls’ 145-pound division, where she lost by fall to Addison Orsua of the CMR JV squad. Ryan Simpson managed a fourth-place finish in the boys’ heavyweight class. Also, Neveah Riphenburg finished sixth at 126.

Valier sent a pair of wrestlers to the podium Saturday. Hannah Monroe won five matches, including four by fall, to secure the title in the girls’ 185-pound division. Fellow Panther Joe Ramos battled to a fifth-place finish at 160 pounds.