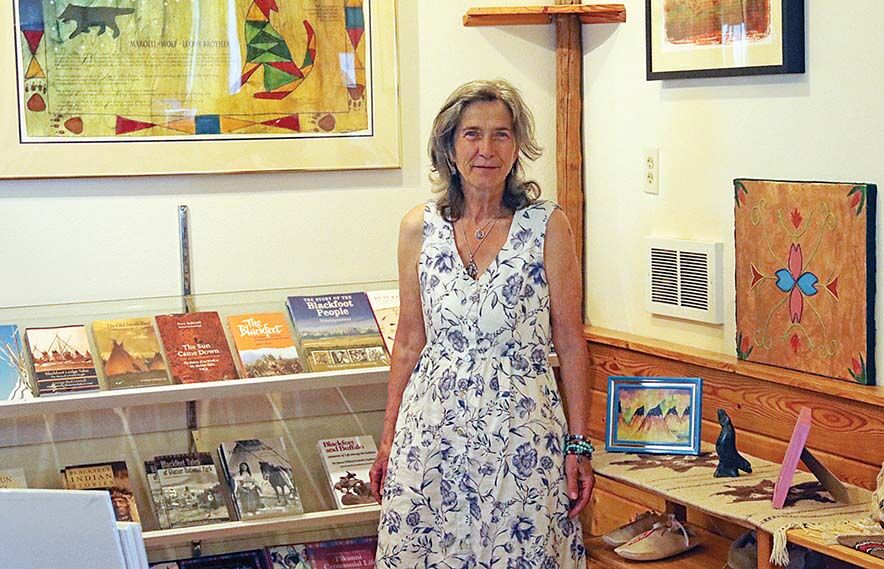 What was once a communal dining area is now a well lighted display room for works of art, books, music, crafts and much more where Angelika Harden-Norman welcomes visitors to Blackfeet Country. 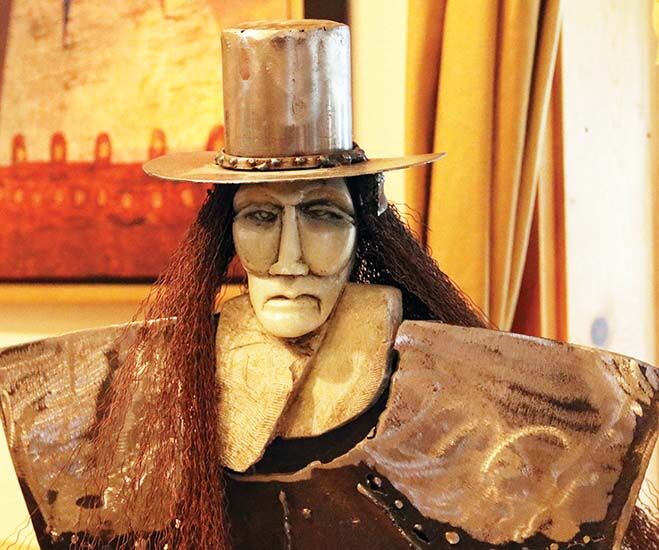 Native art is expanding rapidly, both in availability and in variety of expression. The Lodgepole Gallery features Native art and artists and is open every day during the summer.

What was once a communal dining area is now a well lighted display room for works of art, books, music, crafts and much more where Angelika Harden-Norman welcomes visitors to Blackfeet Country.

Native art is expanding rapidly, both in availability and in variety of expression. The Lodgepole Gallery features Native art and artists and is open every day during the summer.

It’s just a short drive west of Browning to the Lodgepole Gallery on U.S. Highway 89, but it’s a another world inside. Local artists have been displaying their works at the Gallery for decades, and in years past folks have also made the Tipi Village their destination.

Groups from around the world would reserve their space inside a traditional lodge, often as many as 80 people a night, who would stay as people here have lived for thousands of years. When one of the business’s founders, Darrell Norman, passed away, it fell to his widow, Angelika Harden-Norman, to manage a business they’d created over more than a generation.

“I have no tipis anymore because Darrell was sick,” Angelika said. “I had to take care of Darrell, and so we decided it together. I want to sell the tipi camp and keep the cabins and the gallery, and I’m working on an online gallery too. I have two cabins so people feel safer with COVID-19. I can host eight people a night versus more than 40 of them, and the cabins are fully booked so I can’t complain about the cabins.”

The gallery has moved to the eastern room of the building and features works by Darrell Norman, Ernest Marceau, David Dragonfly and Bob Tailfeathers, among others. An accomplished artist in her own right, Angelika’s works also adorn the walls and display spaces.

“People know I’m here and buy artwork,” she said. “The gallery is still a bit slow, but I’m not wanting pressure so I’m doing what I can do. It’s important to have long time relationships with artists to get beautiful things to sell.”

In addition to the formerly mentioned artists, Angelika is also getting pottery from Earl Livermore, a Blackfeet artist who lives in Seattle, and she has some works by King Kuka and Lyle Omeasoo.

“I’m hoping for more time in the gallery in the future,” she said, “because the tipi camp was labor intensive, and it was flourishing. That’s the reason the gallery was really a stepchild, and I hope to change that.”

The Lodgepole Gallery is open from 10 a.m. to 2 p.m. and from 3 p.m. to 8 p.m. seven days a week during the summer and by appointment in the winter. For more information, call Angelika Harden-Norman at 406-338-2787 or visit www.blackfeetculturecamp.com.