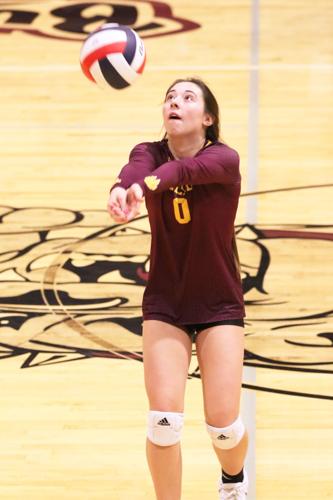 Shelby’s Addison Richman hits a shot during the Northern B Divisional Tournament last weekend at Choteau. Photo by Mike Bashor 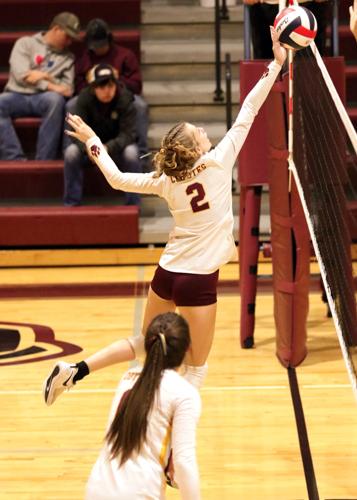 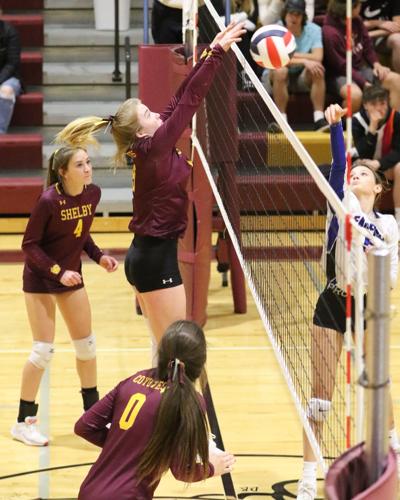 Shelby’s Addison Richman hits a shot during the Northern B Divisional Tournament last weekend at Choteau. Photo by Mike Bashor

The Shelby Coyotes’ volleyball season came to an end at the divisional tournament last weekend in Choteau. The Coyotes defeated Poplar, but lost to Malta and Fairfield.

Thursday the Coyotes were in a tight battle with Malta. The first set was exciting, and the Coyotes won 29-27. Malta bounced back and won the second and third sets 14-25 and 19-25, and Shelby claimed the fourth 25-19, forcing a final set that Malta won, 6-15.

Jori Clary and Addison Richman each had an ace for the Coyotes. Cami Blevins came up with three blocks. Richman had 29 assists. Blevins led the way with 13 kills, while Adele lamb had seven. Reese Lee had a team high 32 digs, and Lamb picked up 19.

Blevins and Lee both dropped in two aces each, Richman had 18 assists, Blevins and Clary each had eight digs, Lamb had 10 kills, and Michelle Celander had seven.

Shelby had five team aces, three by Lee and one each by Blevins and Clary. Maya Gorth had the team’s lone block. Richman had 22 assists. Clary had 23 digs, and Blevins and Lee each had 16.

“Although our season didn’t end the way we wanted to, I am so proud of our girls and what we were able to accomplish,” head coach Lexy Fisher said. “We had girls step into some really big roles this year and play in positions that were the best for our team. We are going to miss our seniors and their leadership next year. They really left it all on the floor on Friday. We are lucky to have a great group returning next year and I think we will see big things out of them as they continue to grow as volleyball players. They are always willing to put in the time in the off season whether it is open gyms or camps and we couldn’t do that without the great support we get from parents, the school and the community.”