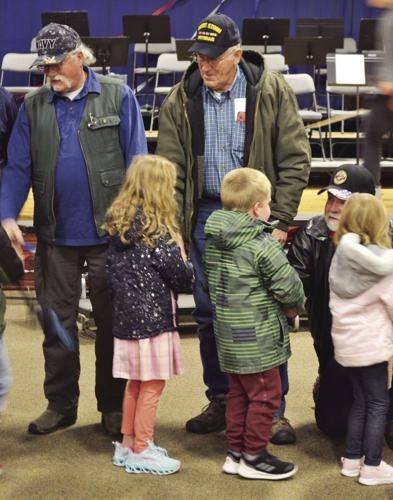 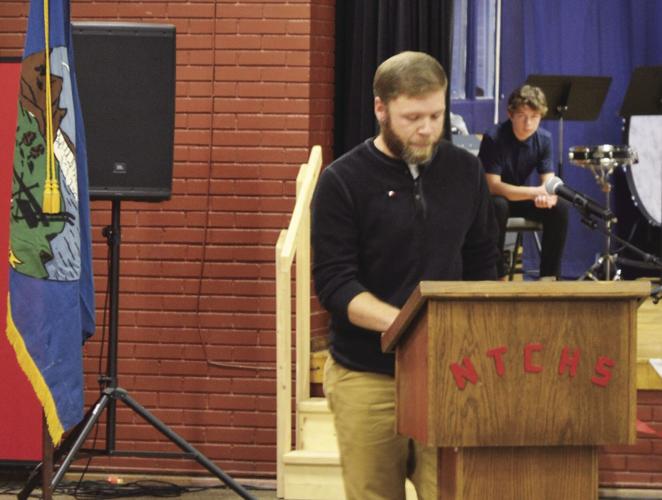 On Nov. 11 members of the North Toole County High School (NTCHS) Student Council invited veterans to a breakfast in honor of Veterans Day. The students cooked pancakes, sausage, and eggs for the veterans of Toole County.

Following the breakfast was the Veterans Day assembly in the NTCHS auditorium. The high school band and choir performed several patriotic songs, as did the third and fourth grade choir. Several members of the junior class wrote and recited original poetry.

Guest speaker, Jabez Rogers, a local veteran, received a standing ovation for his speech about why veterans serve. He talked about his time in the military, serving in places with no running water or electricity, and he also talked about how grateful he was that there are communities like this that support veterans so much.

Following Jabez’s speech was a quilt ceremony. The Quilts of Valor Foundation was started by Catherine Roberts in 2003 when her son was deployed in Iraq. It is a way to comfort and thank veterans for their service. The local ceremony was organized by Faye Tomayer and involved students presenting 12 handmade quilts to veterans.

The quilts were all uniquely patterned in red, white and blue and they were handmade by a group of local women including Mary Alstead, Judy Reighard, Sharon Berthelote, Nancy Simmes and Faye Tomayer.

The Veterans Day assembly is a valuable piece of NTCHS tradition. Each of the younger students gets to put faces to the word “veteran.” They get to meet these heroes in real life, shake their hands and personally thank them for their service. It also enables these veterans to see that they are appreciated by the upcoming generations of children, who are taught to honor their sacrifices and emulate them in their personal lives.

It is a valuable experience for everyone involved, as it also allows the older high school students to give a service back to these veterans, honoring them in a more tangible manner.

Student council advisor Mrs. Aschim states, “The Veterans Day assembly brings the whole community together to honor the service and sacrifice of veterans, as well as recognize active members. It is a great honor to organize the proceedings of such a wonderful event.”