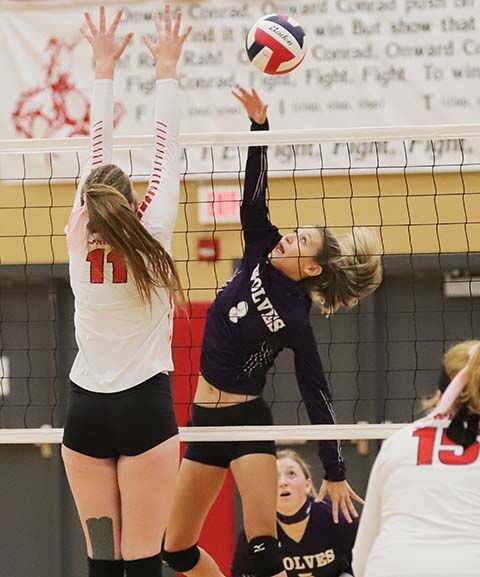 Cut Bank outside hitter Erin Schmidt hammers a kill shot past a Conrad blocker while teammate Camille Bradley looks on from the back row Thursday at the District 1B Tournament in Conrad. 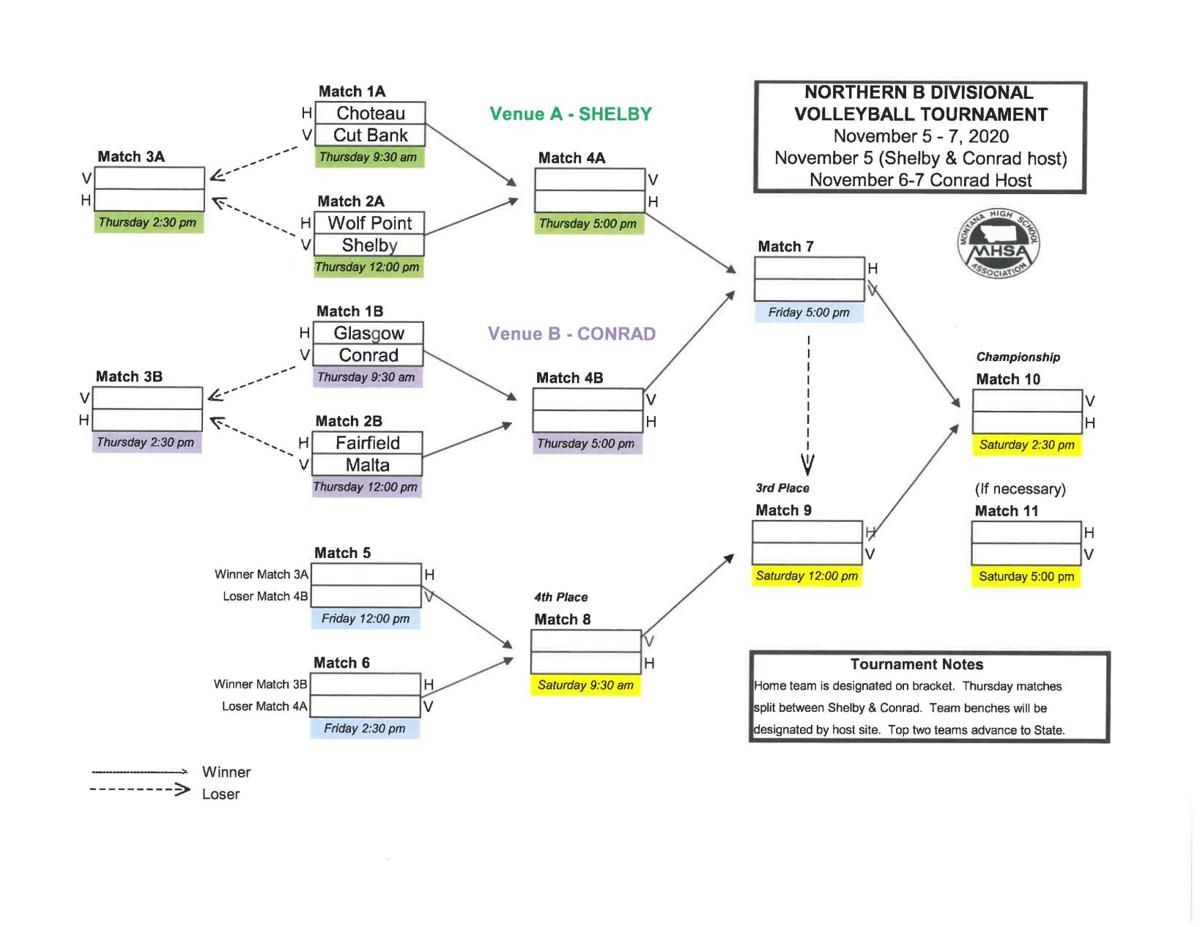 Cut Bank outside hitter Erin Schmidt hammers a kill shot past a Conrad blocker while teammate Camille Bradley looks on from the back row Thursday at the District 1B Tournament in Conrad.

The Cut Bank Lady Wolves went 0-2 at last weekend’s District 1B Volleyball Tournament but will advance to the Northern B Divisional Tournament as the fifth seed to take on top-seeded Choteau this Thursday in Shelbyat 9:30 a.m.

The Lady Wolves entered the 1B tournament as the fifth seed and faced off with Conrad in their opening match. They took the opening set 25-20. The local spikers dropped a tight 29-27 decision in the second set and Conrad used that momentum to take the net two sets, and the match, 25-20, 25-19.

Sienna Spotted Bear led the Lady Wolves’ defense with 28 digs followed by Camille Bradley with 27 and Paayton Branch with 19. Bradley also led the Lady Wolves with eight kills and tallied eight assists and four aces in the loss. Kendall Hibbs followed with five kills while Kendra Spotted Bear notched four. Brianne Murphy dished out 11 assists to lead the squad and Erin Schmidt led at the net with two blocks.

“We had our best opening game against Conrad but fell short in the third and fourth sets,” said head coach Chelsey Brown. “We have proven to ourselves that we can beat this team. We just need to finish a game the way that we start it.”

The loss put the Lady Wolves in a match with the Shelby Coyotes Saturday morning with the winner advancing to the consolation match and the loser awaiting their divisional fate. Shelby made short work of the Lady Wolves as they swept the Cut Bank spikers 25-21, 25-9, 25-23.

Following the loss the Lady Wolves had to wait to see what happened with the Conrad vs. Great Falls Central matchup to learn if they would advance to the Divisional Tournament. With District 1B having seven teams and the 2B only having five the 1B would be awarded a fifth bid into the Divisional Tournament. Fourth seeded Conrad defeated sixth seeded Great Falls Central leaving the Lady Wolves as the highest remaining seed.

The Lady Wolves will be looking to pull an upset on their conference foe from Choteau in their Divisional opener. The top four teams advance to the State Class B Tournament. The site of the tourney was not available at press time.